The exchange ticker for Firo

The ticker name we initially chose was XFR, but we are receiving community feedback that many prefer Firo's ticker to be FIRO. 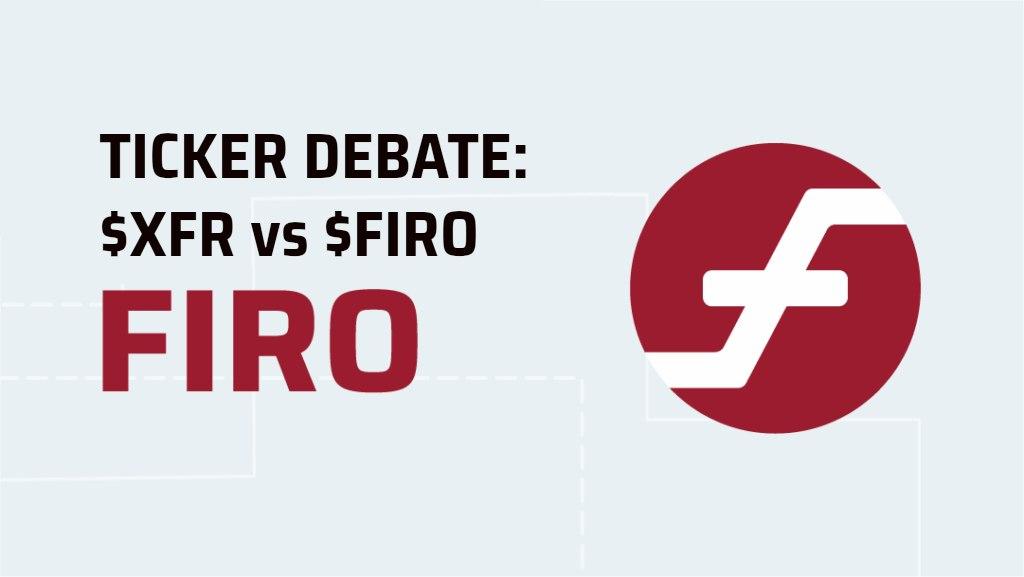 On the 27th of October Zcoin announced its new name: Firo (pronounced “fee-roh”). The new identity was chosen to differentiate from competitors and to make financial privacy more accessible to more people.

The ticker name we initially chose was XFR, but we are receiving community feedback that many prefer Firo's ticker to be FIRO. We therefore recommend all journalists, exchange operators and crypto service providers to use FIRO as the main ticker.

In this post we will look at the pros and cons of the two options.

The case for XFR:

The initial choice for the XFR was made because it complies with naming conventions. The International Organization for Standardization published a list of standard currency codes referred to as the ISO 4217 code list. The X in the code is reserved for currencies with no country: supranational currencies and things which are "similar to" currencies.

In 2016 it was determined that digital currencies, such as Firo, that were not issued by monetary authorities could not be assigned ISO 4217 currency codes. This is why some exchanges use XBT as a ticker for Bitcoin.

The main argument against using the XFR ticker is that it looks very similar to other crypto tickers such as XRP, XLM or XMR. The similarities with XMR are especially problematic since both projects deal with privacy.

The case for FIRO:

When you look at XFR, the name Firo doesn’t immediately come to mind. FIRO is more intuitive for users and will help with name recognition. A practical argument is that it’s easier to use on social media: we’d only need to add #Firo and $FIRO to tweets and posts, no extra #XFR or $XFR tags need.

The main argument against FIRO is that if you want to compete against fiat, you need to play on the same level and comply with world conventions. This would mean using three letters and an X at the start of the ticker. But while ISO 4217 worked nicely for countries, it can't accommodate all of crypto. Even ISO experts themselves believe that they need a separate list of codes to identify digital currencies.

FIRO is the community choice

It should be noted that Bitcoin uses both BTC and XBT, but ideally the community decides on one standard. Firo has conducted polls to harvest the wisdom of the crowd:

Final results of the ticker poll.

The message from the community is clear: FIRO is the preferred choice. We therefore recommend all journalists, exchange operators and crypto service providers to use FIRO as the main ticker. With the FIRO currency code, Firo is ready for the future.

What do you think about the rebranding to Firo? Let us know on social media: https://firo.org/community/