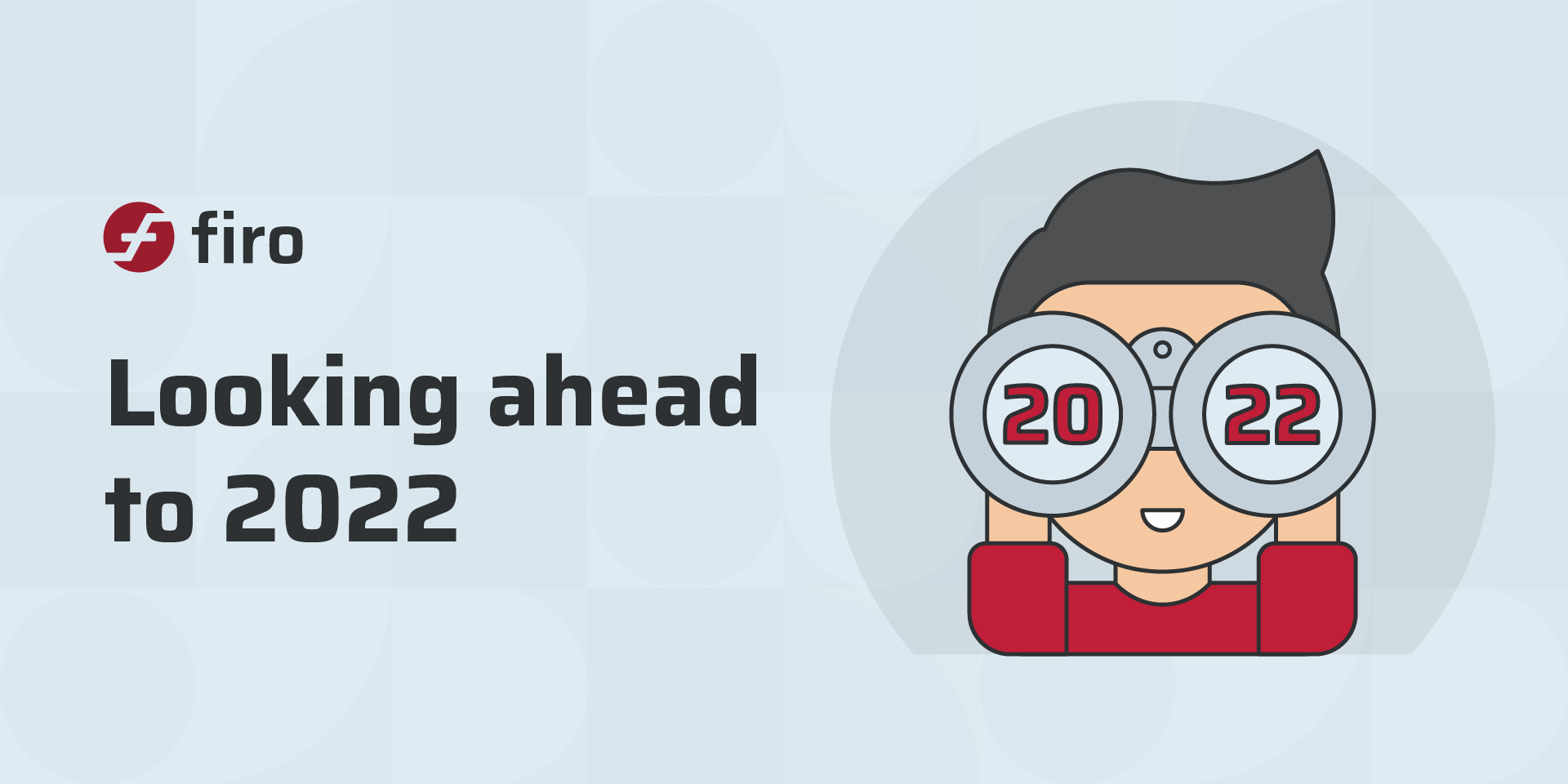 As we approach the end of 2021, we wanted to share what Firo’s core team plans are for the upcoming year along with the general project direction.

A quick look at our achievements in 2021

2021 was a pivotal year as we rolled out Lelantus, ChainLocks for 51% attack protection and instant block finality, InstantSend and FiroPoW. Elysium is also just around the corner along with our mobile wallet with full Lelantus support which we hope to complete by year end.

We also came up with groundbreaking research with Lelantus Spark that greatly improves privacy and flexibility without sacrificing trustlessness along with Helsing, our upcoming private masternode staking mechanism.

We expanded our utility with integration with Binance Smart Chain via a Binance-Pegged BEP20 FIRO token and also have a well funded pair on Pancakeswap DEX. More decentralized options with FiroDEX that would allow atomic swaps across multiple chains are coming in December 2021 as well.

Firo has always been about being a digital form of cash with privacy guarantees. The technological foundations to enable this are already being solidified. We have Lelantus Spark being built out that provides full privacy, transaction finality in a few seconds and a robust mining algorithm to ensure continued decentralized distribution of Firo.

The cryptocurrency scene has changed greatly since Firo was founded and it is now clear that we will be living in a multi-chain world rather than a one coin to rule it all scenario. The use case of cryptocurrency has expanded as well beyond just being a replacement/alternative to fiat for payments to whole new types of economies from DeFi to the metaverse. This landscape is one that Firo has to embrace and accept along with understanding Firo’s role in this multi-chain world.

There are several ways to approach this and we invite our community to weigh in with their opinions as well.

The first approach which we are exploring is using Elysium as a way to bridge assets from other chains into Elysium to enjoy privacy along with cheap fees. This means you can bridge ERC20, BEP20, etc, tokens over into Elysium to transact privately.

This would make Firo not just a privacy coin but also serve as privacy infrastructure for the rest of the cryptocurrency ecosystem that can only be done efficiently and cheaply on our chain. We plan to explore using Firo masternodes to be part of this bridging process to reduce interdependence on other chains along with allowing these masternodes to earn additional streams of income beyond just their share of the block reward.

Interoperability and Firo in other ecosystems

The other approach which we are actively pursuing is to ensure interoperability through decentralized bridges or multi-chain DEXes. This is already underway with talks with major projects on building this out along with our FiroDEX solution.

Another possible approach that we are exploring is to create new chains on other ecosystems such as Avalanche, Symbol, or Horizen that use our Lelantus Spark technology while ensuring that existing Firo long-term holders do have a share on these new chains. This won’t affect our existing core team as new teams would be formed to do this but because they are new projects, they can take advantage of those ecosystem’s funding and research and have direct integration without just relying on bridges. This allows Firo’s technology to be used in more chains and have these ecosystems contributing to research while still accruing value to existing Firo holders. We are in an exploration phase with these other projects.

What about blockchain consensus?

With Ethereum and Zcash moving to Proof-of-Stake, Firo’s core team still believes in Proof of Work as a way to maintain decentralized distribution especially when combined with our hybrid masternode consensus which solves two of PoW’s big issues which are quick finality and the risk of 51% attacks.

We reject the arguments that Proof of Work is bad for the environment in the same vein that electric cars are considered green technology. The issue is clean power production and distribution, not consumption as mining in itself does not produce any emissions and large scale mining is typically done where power output is underutilized which can promote renewable energy power production that would otherwise not be possible.

We also reject the arguments that Proof of Work is not scalable. Proof of Stake doesn’t magically remove bottlenecks of storage, bandwidth or validation. There are also ways to shard using Proof of Work along with introducing DAG structures or other pre-consensus mechanisms as well.

The core team has no immediate plans to change consensus mechanisms at this point in time and continue to believe that a hybrid Proof of Work system achieves a good balance of security, scalability, finality and decentralization which is much more important for a privacy chain.

The end of September 2022 would mark the 2nd year since Founder Rewards have ceased and we promised that there would be a check-in with the community to evaluate the status of the Development Fund from the block reward. A key part in this is defining the role of the core team along with exploring alternative funding mechanisms be it via the Firo Crowdfunding System or a potential Firo MAGIC fund. We look forward to having fruitful discussions with the community on the best way forward!

As cryptocurrency becomes increasingly mainstream and surveillance becomes more widespread over blockchains, Firo’s core team remains committed to protecting our privacy and the freedom of use of our money. We strongly believe in the importance of our work and in Firo’s role in providing privacy infrastructure not just for our community but the entire cryptocurrency ecosystem.

Remember, Firo belongs to the community and that everyone has a role to play be it from contributing code, spreading awareness, writing articles, reaching out to vendors to accept Firo or even just being an active community member! Many of our FiroFam has been amazing and we are working on ways to increase the role of our community and show appreciation. As always, we welcome feedback from the community on our forums!